When will my husband ever grow up?!

So the past week has been absolutely chaotic - I now feel like I have 3 babies! Between toilet training the puppy AND Ewan - Alan has gone and broken his thumb! Now this does not sound like a big deal, however, when you break your thumb, you need a cast right up to your elbow - can you believe it? So Alan can no longer pick Ewan up, write, type or do much of anything it seems.

Now ask me how Alan broke his thumb.

Our special guest - Spiderman - was unable to make a guest appearance at the camps last week, so Alan decided that he would fill in. He already had a spiderman costume and he loves entertaining children or anyone really. So Alan decided to make his grand entrance by climbing on top of the Pirate Ship and once he had the children's attention he jumped off - 14 feet down - and landed just like spiderman. ALMOST. Except that he landed with his thumb first before his feet. The result was that he shattered his thumb. He did, however, go on to do a one hour performance that the kids are still raving about.

So, where does this leave me? Well, with my plate more than a little full!!

On the upside, toilet training the dog is going really well - he now goes to the same spot (on gravel) each time he is in the back yard - in order to save our grass, and hasn't had an accident in days.

As for Ewan, yesterday he had only one accident - today was not quite as successful, but he is out of diapers and into training pants now!!! 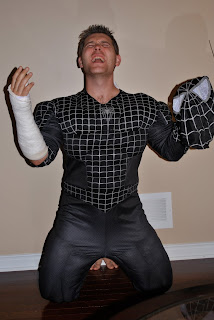 And Alan, well he is still whining about his thumb - and that he cannot go near water for the rest of the summer. Will he ever grow up?
Posted by Lindsay at 12:22 AM