A few months ago Alan and I decided that we wanted to have another family photo session. The only one that we have ever had was when Ewan was 4 weeks old, it was a great experience and I absolutely love the pictures that the photographer had captured.

This time we wanted to have the picture done at our home in our back yard. We wanted them to have a more personal touch and we wanted Ewan to be comfortable in his environment for the session. We decided to have Elizabeth Fulton photography do our photo session. She has a wonderful website (http://elizabethfultonphotography.com/) highlighting lots of newborn, family even wedding sessions. On top of great pictures, Elizabeth also gives you a cd copy of your pictures so that you can print them where ever you would like and always have a back up on the cd. Elizabeth was relaxed and patient - even when Ewan decided to be a monster that morning! We had some great posed shots as well as lots of candid pictures of Ewan. And the the cd was ready within a week of the session!
Here are a few of my favourites - 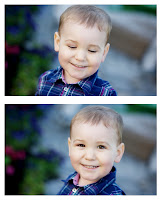 I hope everyone enjoys their week!
Posted by Lindsay at 2:43 PM 1 comment:

So last Thursday evening we packed up the car and drove to Toronto - Ewan did surprisingly well, just singing and chatting, even though he was up for almost the entire drive right to 11pm! Friday we had a wonderful day beginning with a fantastic breakfast buffet at the Delta east (great hotel) followed by a day at the zoo.

The highlights for Ewan were the pony ride and seeing the penguins, polar bears, rhino's and the tiger. It is incredible how big the zoo is and how much there is to see - Alan and I were exhausted by the end of the day. But we did manage to finish the day off with dinner at the Rainforest Cafe - which is a great themed restaurant, but Ewan was a little freaked out by the mechanical elephants.

The next day we spent a low key morning by the hotel pool to try and recover from the zoo day. That afternoon we took Ewan to see Winnie the Pooh - his very first movie in the theatre! He likes Winnie the Pooh - but definitely liked the popcorn better! Once he was finished his popcorn he was more or less ready to go.

Unfortunately, on the Sunday we went to Wonderland and our weekend getaway took a turn for the worst. Compared to any other amusement park that I have been to, Wonderland was a disappointment - it was too small and way too many people. There was only one sit in restaurant to actually get out of the heat and it cost $40 for 2 burgers and fries! We went on two rides in the crazy heat before Ewan napped and then we attempted the water park. There were no lockers - they sold out first thing in the morning, so we had no choice but to leave our stroller with the other strollers at the stroller parking to go on the lazy river together. Getting out of the water - 7 minutes later, we quickly realized our stroller was stollen along with the diaper bag, our shoes, Alan's cell phone, wallet and car keys amongst many other diapers and our clothes. We spent the next 6 hours dealing with security and then the medical emergency centre as Ewan began passing out  from what we thought might be heat stroke. The day just continually got worse until we finally had to cab home. Later that night Ewan began vomiting and we could not get his fever down and so we had to call an ambulance to get us to the hospital. Truth be told, this was probably the highlight of Ewan's weekend - riding in the ambulance! They got the fever down and and chalked it up to a virus, not heat stroke, which is supposedly very rare. The next day I realized he had gotten all 4 of his 2 year old molars in and that was most likely the reason for his fever.

We were lucky to have family ship our extra car keys to us in Toronto and we were on the road that afternoon excited to get home. Just a word of advice, at least bring a bike lock to keep your stroller locked to fence if you do bring it to an amusement park. Even when we thought we had not brought many valuables, the loss very quickly added up!

We have another weekend away to Montreal planned for next weekend - hopefully this is a better trip!
Posted by Lindsay at 10:50 AM 2 comments:

So, if you haven't already heard of the book titled 'Go the F--k to Sleep' by Adam Mansbach, you really must read it or You tube the version read aloud by Samuel L. Jackson. It is hilarious, although vulgar, especially if you have a child that is difficult to put to sleep. I mean, so funny it actually made me cry! If you are looking for a laugh definitely check it out!
Posted by Lindsay at 9:22 AM No comments:

It is only the second week of summer and it has been absolutely wonderful so far!

Last Monday was my first official day of summer and we started the week off by taking a family day trip to Calypso Waterpark! If you have not been to Calypso yet, it really is a phenomenal day out. Although the entrance fee is very steep, it is a full day of fun and in my opinion is comparable to any large amusement park. You are encouraged to bring your own picnic lunch and there are more than enough picnic tables in a shaded location. There are tons of sides for the older kids and tons of fun for the younger ones - Ewan had a great time last year at 16 months and an even better time this year at 2 years being able to go on all the little slides. It was a great day to start out our summer.

Later in the week I also set up a science table outside and tried a few messy experiments with Ewan. Ewan is now in the stage where he must do absolutely everything by himself and so I set all the ingredients up in a way that he can manipulate them. For example squirt bottles with the colored water and vinegar, little scoops for the baking soda and corn starch and lots of spoons and bowls for mixing and pouring. As difficult as it was to not direct him, I was able to just let him go on mixing trying different things and he lasted for over an hour just mixing and pouring! We experimented with volcanoes using baking soda, colored water and vinegar and then making magic mud with corn starch and the colored water. And afterwards I just hosed Ewan down. It was a great messy afternoon! For more messy and creative play ideas visit 'Play at Home Mom' blog http://playathomemom3.blogspot.com/. It is a wonderful blog emphasizing all sorts of indoor and outdoor play activities.

I also have to highlight that we are so thankful that the water ban has been lifted. Almost every day before dinner I have the sprinkler on and Ewan will run around the yard for at least an hour. It gives me time to prep dinner and he cools down and my grass and gardens are finally starting to turn green and bloom!

This week we have some playdates lined up and a trip to Toronto to visit some family, Wonderland and the Zoo!
Posted by Lindsay at 10:12 AM No comments: