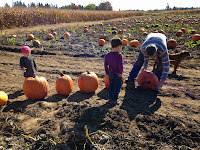 October has come and is almost over - there simply does not seem to be enough hours in the day lately! This month has been full of Fall, Thanksgiving and Halloween themed activities both at home and at A Gym Tale's Nursery School and After School programs. From picking apples, collecting leaves and making collages, to choosing and carving pumpkins and making costumes. 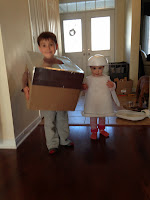 Since Ewan was two years old he has been choosing his own Halloween costume. When he was two he was an elephant riding a horse and when he was three years old he wanted to be Finding Nemo. This year he chose to be Wall-E. He has been crazy about robots lately, and this is one of the few movies that he has seen and loves. Ewan also decided that Isla would be Eve. Alan and I then decided that we would do a family themed Wall-E costume with myself being one of the very large people onboard the space ship and Alan being the captain. These costumes have been fun to make together and Ewan has really enjoyed being part of the process. Alan was hoping for a much easier route of simply buying the costumes - but it became our mission to show him that we could make a better costume and I think we did! I do not have a pick of us all together in costume - that will have to wait until Halloween - but here are a few pics of the kids' costumes coming together.

Outside of choosing and / or making costumes, there are so many great activities for kids focused around Fall and Halloween. Last year I wrote a post detailing some of Ewans' favourite activities and our favourite pumpkin pancake recipe. This year the spider web with a hoola hoop art project have kept both Ewan and Isla as well as the Nursery School kids and After School program very busy drawing bugs (older kids) and simply practicing snipping bugs for the younger kids. Painting pumpkins and cutting out bats and ghosts have also kept us very busy. A new recipe that we just tried and loved are these pumpkin chocolate chip muffins - so delicious. We have also been doing a countdown to Halloween (similar to an advent calendar but with pumpkins) which has really boosted the anticipation for the big day.

What kinds of Fall or Halloween traditions do you carry out at home?

Posted by Lindsay at 9:46 PM No comments: