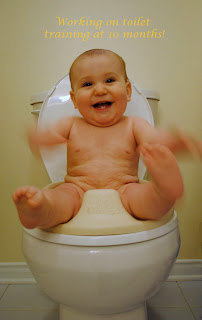 Toilet training - always a hot topic at the centre, especially since all children must be toilet trained as per our licence for the Nursery School program. For most children that is not a problem by 2.5 years, although it does take a considerable amount of 'training' on the parents part. I have taken part in trying to facilitate many children's transition to the toilet - some using a rewards system, some by cheering like a maniac when they pee, and others by simply telling them that they cannot come to school until they are wearing big boy/girl underwear.

I began an experiment with Ewan to try and avoid this training ordeal all together. Since Ewan has been about 3 months - more or less able to sit up with support, I have been sitting him on the toilet for a couple minutes, with a bumbo toilet seat cover, at many of his diaper changes. I say many, because sometimes I am at work, out in a public washroom, or simply do not have the time. At first he would just sit on the toilet and smile as I would sing songs or read stories. Then one day, when he was about 4 months he actually peed while he was on the toilet. From 4 months to about 8 months it was just a hit or miss. At 8 months, Ewan knew when he heard a noise that he was doing a good thing and he would clap his hands and cheer. But now, as of this week, Ewan is able to 'make' himself pee or have a bowel movement when I put him on the toilet. We both go quiet and I say 'listen' and he reliably goes within a few seconds and makes a really funny face when trying!

So, my goal was to have him toilet trained by one year. I know he is not actually toilet 'trained', but I can get by with only 3 cloth diapers a day, if I keep bringing him to the toilet every hour or so and I am pretty happy with that progress. My hope is that as his understanding and recognition of his needs improves it will be a smooth transition from this point.

By the way, I cannot take credit for this approach, it is called Elimination Communication, although I have followed a much less 'strict' approach to it and I think it worked very well!

Does anyone else have any experience with early toilet training? Will it be a smooth transition or will I hit a phase of refusing the toilet?
Posted by Lindsay at 10:27 PM