This holiday season is going to be quite different from the others. It will bring with it a lesson in simplifying and being ok with it, simply because the past 8 weeks have been such a dramatic shift in my daily life.

I have to congratulate every woman who has made it through their pregnancy being sick Every. Single. Day. Multiple times. This pregnancy has been far more difficult than anything I could ever have imagined - being sick every day and with such low energy - just wasn't part of my plan. Mornings are usually good, so I do not feel like work has suffered - however, some days there is more gagging than others! But come afternoon and evening it is a whole other story and I feel like it is my kids that are suffering.

However, I know that they are not. They are in fact probably loving that I am not running off my feet trying to accomplish things like dishes, laundry, cleaning, cooking, meal prep - the stuff that normally gets in the way of the day. Don't even start on the Christmas to-do list. Instead I am curled up on the couch - but we are together reading stories, playing games, or just snuggling. Yes, everything around me is a disaster, but the kids don't see that at all. Hell, Alan probably doesn't even see it (except when there is no clean underwear left)!

So, it really comes down to me trying to wrap my head around letting things go. And being ok with this. Instead of a to do list, I try and choose one thing to get done each day. Sometimes, this is making dinner - however, more often than not we have been living off of frozen meals that I made in September and early October, meals that have been gifted or ready made meals (Ross's has really great meals that just need baked and Play Time cafe in Manotick will actually deliver healthy, organic ready made meals). I am also accepting that Christmas baking just is not going to happen this year - but the kids and I have been thrilled eating the Christmas treats that have been given to us once again from friends and family - thank you!!! Sometimes it is getting through a load of laundry and actually putting it away. Or sometimes it is an activity from our Advent calendar. But there is really only one thing that I can accomplish each day between noon and bed time. This is a dramatic change that has been very hard to try and come to accept. 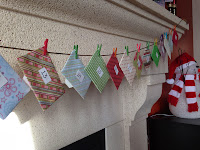 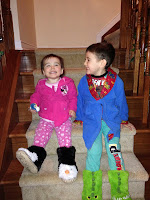 Some other things that I have had to accept are having Ewan bring me the envelope from our Advent calendar as well as a piece of paper and a pen each morning so that I can write which activity we will do - the idea of planning each day until Christmas is just beyond me right now. Many days our holiday activity is simply listening to Christmas music and dancing or getting in pj's and having a hot chocolate. I know my kids are loving this, but it is hard to let go of all the wonderful Pinterest ideas that I have, but simply cannot make happen this year. 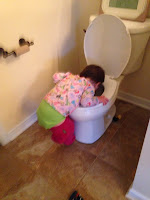 I also have to accept that Isla now pretends to vomit every time she passes a toilet. We were doing quite well with potty training, however, her interests have now moved towards pretending to throw up in the toilet instead. Not quite what I thought this pregnancy would teach my daughter.

Last year I also made almost all of the kids gifts as well as things gifted to others. Once again - not happening this year - the idea of the sewing machine itself makes me nauseous! However, I am determined to make Isla two tutu's. This was a hard year for trying to choose Christmas gifts for Isla, but I know she will love wearing her tutu's, so these I will somehow find the energy to make!

Although this has been a much more quiet holiday season than usual, it has also been quite nice letting go of so many responsibilities and long to do lists. I really enjoyed reading this post as it highlights that everyone, especially those with young children, really need to start trying to be realistic with what can be done in our days while at the same time trying to spend time with our children and stay sane.

What has made your priority list this year? And more importantly, what have you decided to leave off of your list this year?
Posted by Lindsay at 2:41 PM No comments: